Today, we celebrated Founders Day, the day the Faithful Companions of Jesus (FCJ) foundress Marie-Madeleine D’Houet was born in 1781.

Marie-Madeleine d’Houët was born in 1781 and grew up in central France in the aftermath of the French Revolution. In 1804 she married Joseph de Bonnault d’Houët and together they would visit the sick. But Joseph died less than a year later and three months after his death Marie-Madeleine gave birth to their son, Eugene. The young widowed mother still found time to continue her visits to the sick. She was aware of a growing desire to dedicate her whole life to God and to the service of others. In this she was much influenced by the Ignatian spirituality of the Society of Jesus.

She became convinced that God was calling her to found an order of apostolic women who would take their inspiration from Mary, the Mother of Jesus, and the holy women of the gospels. She was determined that the society would take the name of Jesus and follow the Constitutions of the Jesuits. With two companions she founded the Faithful Companions of Jesus in 1820. . During the next ten years the apostolate expanded – other women joined her and further foundations were established in France.

We held an all school assembly this morning where all students from Pre-Kindergarten to grade 12 were involved with dance, song and reflection to remember Marie-Madeleine and to celebrate Founders Day. 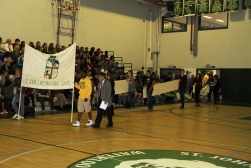