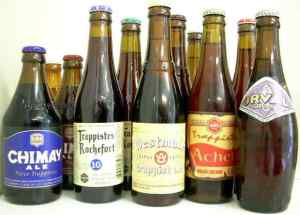 In Belgium, beer is more than just a frothy beverage – it is a culture. With over 450 different varieties, many Belgian beers have personalized beer glasses in which only that beer may be served. The shape of each glass enhances the flavor of the beer for which it is designed. This tradition may seem like behavior reserved for wine snobbery, but Belgians take their beer seriously – and with good reason. The country has enjoyed an unparalleled reputation for specialty beers since the Middle Ages. Connoisseurs favor Belgian beers for their variety, real flavor and character.

There are almost as many beer styles as there are breweries in Belgium. With your choice of geuze, brown, lambic, white, chocolate, and cherry beer, you can’t go wrong. Lambic beer, which Belgium is famous for, is made with an ancient style of brewing, relying on spontaneous fermentation to produce a bone-dry, profoundly tart, and naturally effervescent drink that improves with years in the bottle – much like wine.

Here are the types of beer:
Blanche or White Beers: Sometimes called a wheat beer – it is light, cloudy, and with a hint of citrus.
Lambic: A non-malted wheat beer naturally fermented by wild, airborne yeasts. A draft beer specific to the Brussels area.
Gueuze: A blend of two or more Lambic beers to create a secondary fermentation and a Champagne-like sparkle.
Faro: Lambic light, if you will. A sweetened variety with some of the flavor but less intensity of other Lambics.
Kriek: A Lambic beer in which further fermentation is brought about with the addition of cherries or raspberries – refreshing in summer!
Brown Beers: These beers interplay caramel-like malty sweetness and a sourness gained from several months of maturation.
Red Beers: Produced from red barley, these beers are aged in oak. Fruity, sweet & sour, very thirst-quenching!
Golden Beers: These beers are similar to Pilsner lagers using very pale malts and hops, while retaining ale yeasts.