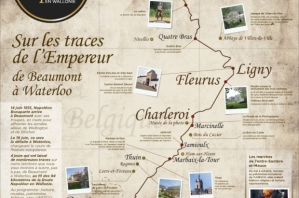 The “Napoleon Trail in Wallonia” – a tourist trail retracing the steps of the Emperor in Belgium during his hundred days campaign in 1815 – was officially opened recently by the Walloon Minister for Tourism Paul Furlan.

The trail, extending over 94 kilometres from Beaumont to Waterloo, was conceived with the help of historians and follows the footsteps of the Emperor made nearly 200 years ago.

A Michelin trail guide, co-written by the Belgian historian Philippe Raxhon, accompanies the new Napoleon Trail and includes historical anecdotes, event listings, cycle routes and a selection of locations for food and lodging. Those without a guide can also follow the some 200 signs along the route itself. The signs indicate points of interest “such as battlegrounds, where Napoleon slept and other various anecdotes,” explained spokesperson Jean Fassiaux at the inauguration.

The trail, launched in the lead up to the Battle of Waterloo’s bicentennial in 2015, “is also intended to encourage visitors to come to Wallonia” and offer them “new ways to discover our rich heritage,” noted Fassiaux.

A GPS circuit is being finalised for those visiting the Napoleon Trail by bike or car, as well as hikers equipped with smartphones or tablets. Seven video clips and a 15-minute documentary are also being released to complement the newly inaugurated trail. More information is available at www.laroutenapoleonenwallonie.be