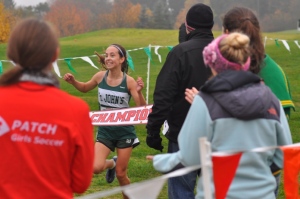 The results were outstanding as the girls won team gold and our boys took the team silver! Kayla took individual first place, breaking her 6th course record of the year. She was followed by Sofia in 2nd place. Both girls were named “1st team All Europe” and Kayla was also voted MVP runner of the meet. Other good performances from Sara and Miranda secured the gold for the Lions!

On the boys side Isaiah led the way, followed by Hidde, Pierre-Louis and Aleksander, who both ran their best times of the year, and Danny helped the Lions to that silver team medal.

Congratulations to the cross country athletes and coaches!