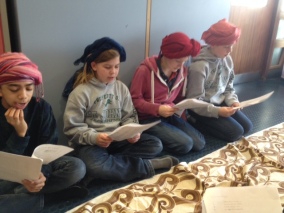 What better way to understand a culture and a time in history than to take on a role in the first person?  This is exactly what students in 6th grade are doing in their Social Studies class.  The second semester is all about the middle ages from different parts of the world.  Currently, students are learning why the Islamic Empire was so successful and in such stark contrast to Medieval Europe by re-enacting the story of Mohammed and his message with costumes and an animating script that summarizes their understanding of the culture’s beginnings.  Here the students model some of their versions of Arabian protective head coverings, turbans and the hijab while they practice their lines.