At St. John’s, we do everything we can to recognize the unique potential of each of our students and to encourage them to pursue their various capabilities. One of our star athletes accredits St. John’s in helping him build his skills and talent for swimming and honing his budding passion for the sport at a young age.

Cyril started at St. John’s when he was 3. He participated in the swimming lessons in Elementary School. Eventually he enrolled in St. John’s after school aquatic program. For him, it soon became his favorite sport. He began swimming three to four times a week. During heavy training, he would up his practices to five times a week. He began winning competitions and found increased confidence in his abilities with every win. Cyril says that swimming at 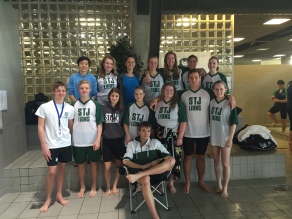 St. John’s has taught him how to commit fully to a sport. Even during the “off-season”, he continues his training every week, so as to stay in shape and keep bettering himself.  He is now part of the highest level swimming program that St. John’s offers and inspires peers and those in grades below him to work hard to pursue their athletic passions.

Cyril won gold in the medley and in the 200 meters freestyle, as well as silver in the 100 meter butterfly at the 2016 ISST championships. We are very proud of his achievements and that of our young budding athletes. We hope to continue making champions!