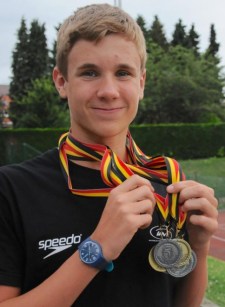 A swimming pool can be a good place to study. Just ask Cyril.

“During exams, it helps quite a lot,” says Cyril, 16, a grade 11 student at St. John’s. “You get to focus on yourself, especially when you’re doing long distance training.”

Cyril, who took his first dip at age 3 with his grandparents while on a ski trip in Switzerland, does more than think about academics when he’s in the pool. He also thinks about swimming faster than he did the last time.

Cyril out-swam the competition in Antwerp last year to win gold and the 400m individual medley, becoming the Belgian champion at age 15. He also snared a bronze in the 400m freestyle, topping his personal best time by almost seven seconds.

Athletic success has its price, says Cyril, who started swimming competitively with the St.

John’s swim team six years ago before joining a club team with Braine-l’Alleud Waterloo Swimming. More recently he began swimming with a club in Brussels.

Training in the pool consumes two hours every night, and he does two sessions on Saturdays. Then there are the dry land workouts in the gym. Not to be forgotten: the schedule of competitions. The season stretches from the beginning of September to the end of July.

“After training, I need sleep. All I really do is eat and then sleep,” Cyril says. “You can’t do any homework after training. At least I can’t.”

How does he balance it all? By putting all his academic projects and athletic routines into a notebook. And then sticking to the schedule and planning around those demands.

“It gets pretty automatic,” says Cyril. “It gives a big structural help to a person.”

Some weeks are better than others. But it requires that Cyril use study periods at St. John’s to focus on his homework and upcoming projects.

“I don’t wait until the day before to start it,” he stresses. “And you can’t just go to the movies at night with friends.” 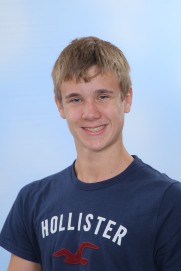 When he isn’t in classes, training, or studying, Cyril says he plays the piano after school with his grandmother. He used to take lunchtime lessons at St. John’s but has had to cut back to dedicate more time to schoolwork.

Swimming has taken him around Europe for competitions and training sessions. Where it will ultimately take Cyril is to be determined, but his goals include the European and world championships. Attending a university, likely in the United Kingdom or the United States of America, is also part of the plans.

The solution is simple, says Cyril. “I just need to improve my times.”